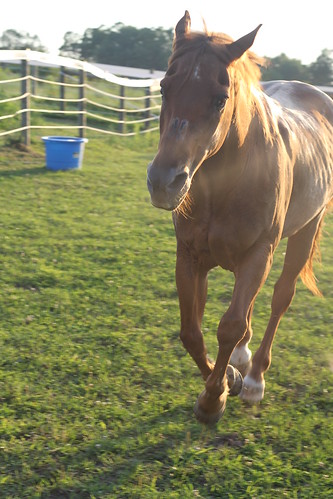 Cody was a wild mustang, born in the Pryor Mountains of Montana in 1986. Captured by the Bureau of Land Management (BLM), Cody was branded. This branding (pictured here as a series of symbols) reveals his history to us. He was first trained as Revolutionary War Re-Enactment Horse. Later, having survived a barn fire and numerous, severe beatings from humans, he was trained as a lesson horse; a role well suited to this gentle, easy animal. But Cody’s gentle, non-dominant nature did not serve him well, subjecting him to beatings by his own herd! His nose was so severely broken that it caused him to go blind, and compromised his breathing.

Cody was later trained as a hippotherapy horse, used to assist severely ill and disabled children who rode him while performing their physical and occupational therapy. Upon being retired from this noble profession, Cody once again found himself without a home. On Aug. 15, 2007, Forever Amber Acres Animal Sanctuary came into his life, rescuing him before possibly finding his way to the Sugar Creek Auction in Ohio and imminent slaughter.

Cody has continued to face physical challenges. In 2010, he was successfully rehabbed from a leg fracture by FAAAS. In 2012, he was diagnosed with Insulin Resistance, and is on daily holistic supplements to treat this condition. Cody also requires a special senior feed, high in fat and softer for him to chew because of his previously broken jaw. In the spring of 2013 Cody tore his suspensory ligament and was successfully rehabbed. In 2014 Cody was near death, but survived Colic. Despite enduring enormous hardships, Cody was more than 30 years young when he passed on; enjoying the freedom to live out his days in the safety, care and peace of his forever home at Forever Amber Acres Animal Sanctuary. See some of the heartfelt messages shared by his friends here. 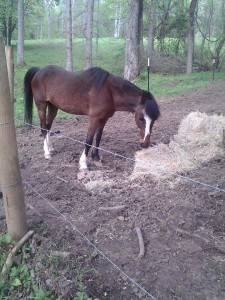 Velvet was more than a twenty-seven year old Welsh/Arab pony with the look of an Arab. Adopted by Kathryn F., she had cushings disease and required daily medication. She, along with Fash, were rescues many years ago, and the two horses were very bonded; we know that the two lived out the remainder of their days in health, love and happiness together. 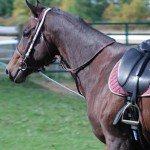 Born in 1996, the thoroughbred known on the racetrack as Twinko earned nearly $63,000 during her career. On Nov. 6, 2011, a spotter sent by horse rescue advocates to monitor auction activities, witnessed a kill buyer purchasing her, and Twinko’s rescue went into high gear. Michele received a call late that evening to help secure an immediate foster home and pick her up. Making a secret deal with a meat buyer, Michele, assisted by a rescue volunteer, arranged to pick Twinko up in an abandoned parking lot the following night. Money was exchanged with the stranger who drove away before the horse was even loaded on the trailer. Thankfully, she was spared more pain and suffering and found foster care with friends that rename her Hope. She was rehabbed from severe injuries and infection, and restored to a healthy weight. 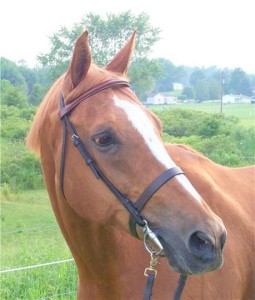 Our namesake, Foreveramber, was destined to be the very special thoroughbred thattransformed Michele’s love for horses into a fully realized vision of the animal sanctuary that bears her name. Rescued by a networking partner, in 2006, Amber was deemed “crazy and uptight” by trainers and others in the world of horse events. Amber’s lineage was impressive; her grandsire “Avatar” having won the 1975 Belmont Stakes, the third jewel in the Triple Crown Races. But Amber’s temperamental, hot-blooded nature made her hard to handle, and she never fulfilled the expectations her family’s history had set up for her.

Adopted by Michele in July 2006, she worked Amber consistently four days a week for months to desensitize her, eventually succeeding in conditioning the once skittish beauty for riding in clinics and pleasure riding. As Michele’s bond with her first rescue deepened, so did her passion for rescue and her desire to make a difference for discarded animals like Amber. Cody followed in August 2007. That summer, the once hot-blooded Amber became lethargic and was diagnosed with Cushing’s Disease. Her health compromised and her fate in question due to the disease, Michele began her search for a permanent home for her two rescues. “Forever Amber Acres Farm” was purchased in August 2008.

Amber was diagnosed with Laminitis and Founder in September 2009. At the age of 23, herimmune system profoundly compromised and battling a deadly sinus cavity infection, Amber was humanely euthanized on April 21, 2010. For eight months, struggling to pull through her illness and confined to her stall, her friend Cody came to comfort her throughout 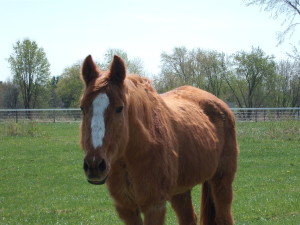 the day. These two special horses, bonded as rescues, were inseparable until the very end. Michele chose a spot central to the farm for Amber’s burial, and she now rests on a site that can be seen from all angles, and at the point of highest elevation. Confined for so many months, deprived of pasture and sunlight, her final day was a beautifully sunny one. Accompanied by Passion (another rescued horse at the farm) and with Cody looking on, Amber took one last walk around the entire perimeter of the farm before being guided to her final resting place. In 2013, volunteers hand painted memorial stones that now serve as her permanent grave markers. 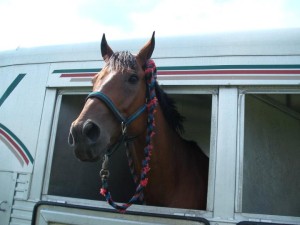 Our beloved Teddy Bear was just days away from being shipped to Mexico and slaughtered for human consumption when he was found trapped in the kill pen of the Sugar Creek Auction in Kidron, OH., on July 23, 2010. As with so many of these beautiful, thoroughbred race horses, discarded after they’ve been deemed “useless” by former owners, Teddy’s fate came down to being at either the right or wrong place at the right or wrong time. For Teddy, marked only as #741 when he was rescued by a coalition that included the ad-hoc group “Fans of Barbaro,” Alex Brown Racing, Deborah Jones, and John Murrell, July 26, 2010 was the “right” day; saved in the nick of time from the horrific, barbaric process of horse slaughter.

Upon arrival at FAAAS, the transporter reported that he had made most of the journey with his head out of the trailer. Teddy, it seemed, instinctively knew he had found freedom and safety. Set free in the paddock that day, the first thing he did was take a “freedom roll” on Amber’s favorite spot. Amber had passed just three months and four days prior to his arrival. Later that day, the unknown thoroughbred was identified through his lip tattoo and other markings as Abovethefacts, a former race horse that had earned nearly $33,000 in his time on the tracks; very respectable. That said, his racing days were over and someone had deemed him worthless. His auction tags had clearly identified this majestic, gentle giant as straight to slaughter.

Teddy had his first bath on day two. Teddy loved baths! Running free in the pasture that day, it was clear that Teddy was very much at home. Named Teddy Bear to better suit his gentle personality, he remained quarantined, separated from the rest of his new herd for 30 days to ensure his health and keep the others free of possible infectious disease. 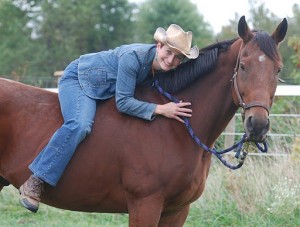 for the first time. Without bit or bridle, this fast, former racehorse showed the depth of his gentle soul and won the hearts of everyone he met. Teddy’s time at the sanctuary was tragically brief. On April 10, 2012, the day after his 15th birthday, our Teddy Bear died suddenly of a massive stroke. His normal routine following breakfast was to run out into the paddock and take a roll in what had been Amber’s dirt pit. On this particular morning, Teddy instead galloped at full speed up into the pasture, stopped, rolled in front of Amber’s gravesite, stood up for a moment, and was gone in an instant. His permanent resting place is nearby. 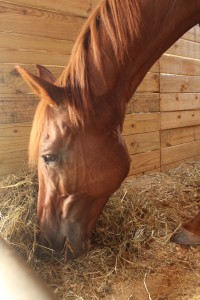 In November of 2014, FAAAS received this 20 year old ex-broodmare, Trakehner Warmblood mare “Shari”. She was an owner surrender. Originally, Shari was placed with a new home and protected with our First Right of Refusal Contract. When her situation turned sour, we rescued her once again. Unfortunately, she was 450 lbs underweight. A volunteer paired up with Jasper County Sherif Department (South Carolina) to bring her to our sanctuary safely.

During her 5 years with us, Shari continued to suffer from tumors on her reproductive organs due to the neglect she had experienced in her past. She received special treatments and food to mitigate the effects to her health and remained a happy girl throughout the rest of her life. Her gentle, caring nature earned her the nickname “Mama” around the sanctuary. In 2018, she became a much loved member of our Equine-Assisted Psychotherapy program; a favorite of both our clients and volunteers. Late last year Mama Shari was diagnosed with advanced cancer and received conventional and holistic comfort care until her passing in November, 2019. She is buried on our grounds with the “sisters” and “brothers” that preceded her. Sweet Mama Shari is greatly missed here at FAAAS! 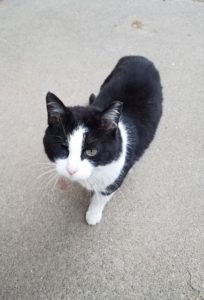 Like many of our feline residents at the sanctuary, Tuxie Merry Sprinkles was feral when she first came to us in the winter of 2012. We would always find her lurking about in the fields and playing hide-n-seek with her one good eye. Despite holding tight to her feral instincts, Tuxie was a beloved member of our family for 7 years. She passed away in December, 2019.